How Mould Affects Your Crawl Space & Your Home 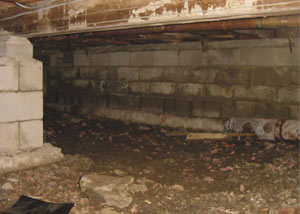 When mould and rot are allowed to grow in crawl spaces, they lead to health and structural problems that will affect the entire home.

Crawl space mould and rot is a housing epidemic across the United States and Canada that, with a small investment, can be easily avoided.

Installing a crawl space vapor barrier system in your home will protect it from most of the common causes of rot, damage, and humidity.

Installation of this kind of system usually takes less than a day to complete. 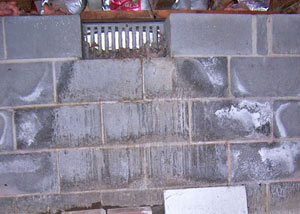 Mould loves dark spaces, unseasoned lumber, and high humidity levels. Because your crawl space is warmed by your home above it and the natural warmth of the ground below, it stays at about 50 °-60 ° Fahrenheit all year long.

Practically speaking, mould spores are everywhere -- no matter how clean your home is.

If these mould spores are exposed to oxygen, a relative humidity of 60% or higher, and temperatures of 40 ° Fahrenheit or higher, they have ideal conditions for growth.

For rot and mould to grow on wood, the wood needs to have a moisture content of 20-29% or higher.

Even in the case of dry rot, there will need to be a source of water nearby. This water can enter a crawl space through poorly designed downspouts or grading, through groundwater flooding, and/or through plumbing leaks/

Mould can also grow when there's adequate moisture in the air, in the form of humidity. This moisture commonly enters a crawl space as water vapor passing through the soil or concrete. In this case, concrete will wick water and through the ground and releases it into the air.

One of the most common and avoidable reasons for crawl space mould and rot, however, are crawl space vents. In the summer, these open vents let in summer air, which is often loaded with humidity. As the air enters the crawl space, it quickly cools in this dark space. As air cools, it loses some of its ability to hold moisture, and the excess moisture is dropped on surfaces in your crawl space as condensation.

Over time, this condensation will saturate the wood in your crawl space--and mould will grow.

Ask yourself these questions: 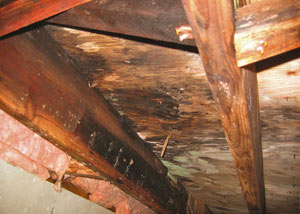 Surface mould will create cosmetic discoloration only and can be cleaned off. Decay fungi (above) will darken and shrink the wood while causing structural damage.

Signs of crawl space mould are often evident without having to enter the crawl space at all. Because air moves upwards in a home as it's heated, a vacuum is created that will pull air up through the crawl space through a process known as the "stack effect".

If your crawl space has mould, you will be able to tell -- your house will smell musty, and you may even begin to feel and/or display symptoms of mould and dust mite allergies.

Additionally, as crawl spaces begin to rot and decay, the floor above will begin to sag, buckle, or become uneven.

Doors may jam, mould may grow on first floor carpeting, and, in the long run, the floor itself will collapse inwards.

In the crawl space itself, warning signs include visible mould growth, musty odors, and discoloration and/or signs of water damage on the wood.

White, powdery substances on concrete walls is not likely to be mould itself, but it's indicative of moisture passing through the walls and creating a humid environment. If there are mouldy, musty odors, then mould will be somewhere.

Types Of mould In Crawl Spaces 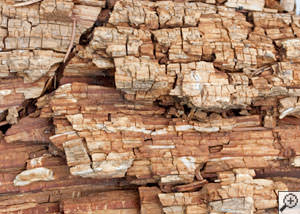 Dry rot damage on wood. Notice the cube-shaped pieces flaking off the surface.

Mould and rot fungi can be classified in two ways: what grows on the surface, and what grows within the wood itself.

Surface mould fungi will cause cosmetic discoloration only, and it will not significantly damage the structural strength of the wood. This mould can simply be cleaned off the surface.

Decay fungi will darken and shrink the wood, leading to severe structural damage of the wood and the eventual crumbling and decomposition of the wood overall.

Wood with decay fungi looks soggy and spongy. This cannot simply be cleaned off, and replacement of damaged wood may be necessary.

One other variety of wood-damaging fungi is dry rot, also known as brown rot and cubical rot.

As displayed in the photo above, wood damage from this kind of rot is shown as deteriorating the wood into small squares or rectangles. Often mistaken for termite damage because of its appearance, this is an extremely damaging type of fungi.

One other unique feature of dry rot is its ability to pull water from far-away water sources through "rhizomorphs." Rhizomorphs can extend for as much as thirty feet, stretching across brick, concrete, mortar, and similar materials. In the case of Serpula lacrimans, water has been transported as much as three stories upwards!

Traditional methods of mould removal, such as bleach and water, will not provide a long-term solution for mould removal. These methods do not address rot damage or humidity issues.

Mould will begin growing again in 24-48 hours if the mould-growing environment is not changed. And dormant fungi can reactivate when dry, infected wood becomes wet again.

The solution to crawl space mould and moisture is to seal the crawl space vents, install a plastic liner on the walls and floors, and dry the space with a self-draining dehumidifier. Otherwise, any repairs and mould remediation steps you take are a temporary fix only.