The "Stack Effect" And Your Home Near Nanaimo, Saanich, Victoria

How air movement in your home can lead to mould, rot and damage 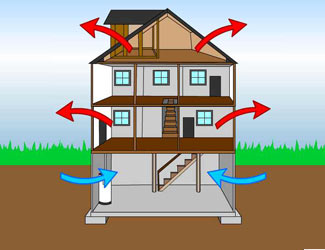 Crawl spaces and basements are well known for being damp, dank spaces. Even when your home has no groundwater flooding issues and has perfect plumbing, the spaces can be plagued by moisture issues.

One major culprit for humidity in your home is a phenomenon called the "stack effect".

The stack effect refers to the process in which hot air leaves the home through your attic and upper levels. As it does, a vacuum is created below, and new air is pulled upwards through the basement, crawl space, and lower levels.

Too much humidity in your basement or crawl space?
Get a FREE Quote!

For a free humidity control quote in Victoria, Nanaimo, Saanich, or nearby in British Columbia, call or e-mail us today! 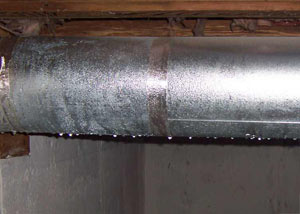 What happens if the outside air that replaces the air leaving the attic is being pulled into the basement or crawl space through vents or other openings?

Basements and crawl spaces are naturally cooled by the earth around them which keeps a fairly constant temperature year-round. Any air that enters that space from outside will be cooled as well.

In this case, the relative humidity will rise by 26.4% (12 °F x 2.2%). Add the 80% humidity you already had, and you have 106.4% relative humidity. However, when the humidity reaches 100%, the air can hold no more water! So this extra humidity is dropped from the air as condensation, which is deposited on cool surfaces in the space, such as wood, metal or concrete. 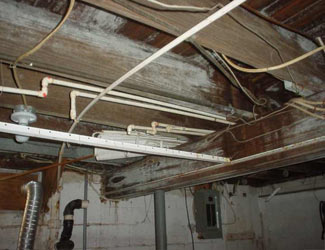 mould needs moisture to survive, and it draws this humidity from the air around it. As the relative humidity in your basement or crawl space rises to 60% or higher, mould will live, thrive, and survive in the space.

As mould reproduces, it releases millions of allergenic mould spores into the air. In fact, The Journal of Property Management's research shows that a single square inch of drywall can contain as much as ten million spores!

Because of the stack effect, these mould spores will not be confined to your basement or crawl space. As air moves up from these spaces into your home, it will bring mould spores and humidity along with it. If you notice that you suffer from symptoms such as a runny nose, watery eyes, mild allergic reactions, a scratchy throat, fatigue, or headaches at home that seem to disappear once you leave the building, mould allergens may be the culprit.

Of course, mould and rot will also wreak havoc on your home. Damaged wood, structural issues, and ruined personal property are all consequences of mould, mildew, rot & humidity in a basement or crawl space.

Even when your home is protected from outside humidity, your home can still experience humidity when sources of standing water exist in your home.

Install a sump pump system to prevent groundwater flooding, and be sure to actively look for plumbing leaks-- especially in your crawl space.

The key to controlling mould in your basement or crawl space is to eliminate the humidity that keeps it thriving.

At Island Basement Systems we recommend starting by sealing off any vents, covering any exposed dirt and concrete, and installing airtight crawl space doors. Replacing drafty basement windows will also help hold back outside air.

Once this has been completed, it's a great idea to install either an energy-efficient basement dehumidifier or crawl space dehumidifier. This will remove any existing humidity in the space and keep it dry in the future.

We offer free basement & crawl space humidity control estimates in British Columbia, including Saanich, Victoria, Nanaimo and many areas nearby. Contact us today to get started!