Hello, and thanks for contacting us. Please note that we have received an overwhelming number of requests for inspections and estimates due to the unprecedented rains. We are currently booking our inspections into January, as there is an abundance of leaking basements and crawlspaces out there. If you would like to be added to our wait list for inspections, please fill out the contact form, and we will touch base when we can (about 1-2 weeks) to book an inspection slot. Be safe out there, and thanks again for contacting us. 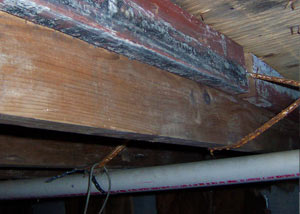 10% of wood production in the United States is used to repair rotting wood.

Wood rot destroys about 20 billion board feet of timber each year -- far more than the annual amount destroyed by fire damage.

Repairing wood damage in crawl spaces caused by rot, mould, and termites can seem like an overwhelming and expensive project.

However, if you can catch the problem before it becomes too severe, it can be quickly and affordably remedied by a professional crawl space contractor.

Simply repairing mould damage is not a lasting solution. If the conditions for mould to regrow exist (moisture, warmth, and a food source), mould will simply resume growing on your new wood over time.

Professional mould Repairs In British Columbia
Get a FREE Quote!

At Island Basement Systems, we specialize in repairing crawl space issues of all types, including mouldy or damaged wood. For a free wood damage quote, call or e-mail us today!

We serve the British Columbia area, including surrounding areas such as Duncan, Campbell River, Langford, Courtenay, Port Alberni, Squamish, Esquimalt and nearby.

Before Replacing Your Rotting Wood...

Many homeowners and contractors make the mistake of repairing the damaged wood and calling the problem solved. But what about the cause of the damage in the first place?

Before removing and replacing rotting wood, follow these steps:

If left unchecked, rot and mould can lead to serious structural damage.

A professional can help find the source of the problem and provide a permanent repair solution.

When inspecting the damage, your contractor will have three main challenges:

In the case of structural wood, the entire piece -- not just the damaged portion -- will need to be replaced or reinforced. This is true with structural posts, floor joists, beams, and similar wood.

The nature of the problem in your home isn't always clear to an untrained eye. A professional should be called in to identify what caused the damage so it doesn't reoccur.

Why aren't trees damaged by mould and rot? The answer to this question can help you understand something important about mould:

As mould begins to grow, it feeds on the sugars, starches, and other compounds in wood. Living wood protects itself from this kind of mould and rot damage with its bark. Bark is absent of the sugars and starches that mould eats, discouraging mould growth. When wood is cut and processed, it loses this natural layer of protection and opens the door for mould and rot growth.

Surface mould is able only to consume the sugars and starches in the wood, which does not influence the strength of the wood.

Wood rot is able to consume sugars and starches as well, but it's also able to convert the structural polymers in wood fibers to food, which weakens the wood's strength.

If you have surface mould, it can be cleaned off without having damaged your wood. Wood rot is a deeper problem that may require serious repairs. 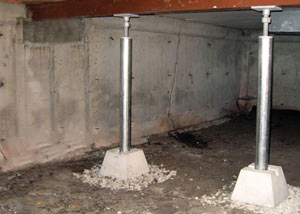 Crawl space jack posts do more than just reinforce your rotting crawl space beams and posts -- they can also be used over time to attempt to restore your floor to its original, level position.

Often, it's not necessary to replace the wood -- even when the crawl space frame shows mould damage.

In these cases, we recommend crawl space jack posts, also known as crawl space supports, to repair the damage. These adjustable support beams can be installed quickly underneath your home to restore strength to your structure.

If your structural support beams are rotted, a sister beam of new wood may be installed along the old one to add structural strength.

They're also an effective solution for crawl spaces that are sagging due to a poorly designed crawl space -- one that was originally created with too few supports to bear the weight of your home.

After Repairing Your Crawl Space...

Repairing your crawl space is not a job you want to do more than once! To prevent problems with mould, rot, and pests in the future, follow these steps: