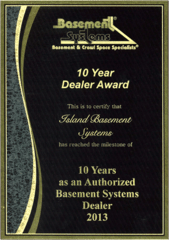 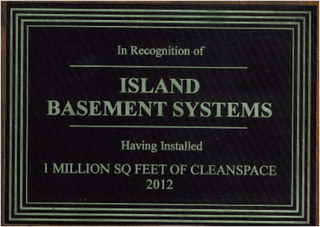 Click the icons to see what our customers had to say.

When you have a crawl space that is not properly sealed, water and pests can intrude near your home’s foundation and in your basement. This can lead to mold problems, pest infestations and can even compromise the structural integrity of your foundation. Don’t risk serious damage to your home. Instead call Island Basement Systems for friendly, professional services and a free estimate today! As a Basement Systems and Foundation Supportworks dealer we offer special access to industry-leading products and services that you won’t find elsewhere. Keep your crawl space and foundation strong and dry to ensure your home’s value for generations!

We Offer Top Services in Saanichton, BC:

A basement that is under three feet of water is an enormous problem. However, wet walls or mildew odors around your basement or crawl space are indicators that it’s time to call a professional foundation repair company. There are lots of happy customers all over Saanichton that will attest to the quality of Island Basement Systems’s basement waterproofing, crawl space encapsulation, and foundation repair solutions. We install top-of-the-line sump pumps, dehumidification systems, and vapor barrier products. Repair your basement and crawl space so that it is secure, dry and protects your home for decades.

Foundation issues can cause structural damage to your house and cost a lot of money. If your basement or crawl space is moldy, or you have bowing walls in your basement, the time to call a foundation repair company in Saanichton is now. Island Basement Systems uses the best foundation repair solutions the market has to offer. As a Foundation Supportworks member we offer special access to products that are thoughtfully designed and expertly tested by a team of structural and geotechnical engineers. Whether you require help fixing cracks, bowing walls, a sinking foundation, or something worse, we can help. Our experienced team members will meticulously inspect your home, figure out the problem, and walk you through any needed services.

Mold and water damage are serious problems that need to be taken care of as soon as possible. Call 1-855-206-4811 or use our online form to contact Island Basement Systems today and schedule your no-cost estimate in Saanichton, BC